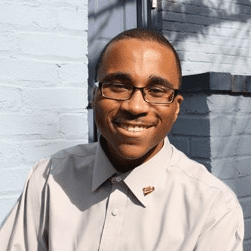 Carlos McKnight is a recent graduate of Thurgood Marshall Academy where he was involved in many activities such as band, GSA, newspaper, debate team, and school government. For the past four summers he has taken part in the Summer Youth Employment Program through the city of DC. He is drawn to politics and issues facing LGBTQ communities and will be studying political science at Damon College. Carlos is excited to advocate for issues such as workplace discrimination and adoption rights that many LGBTQ people still face.